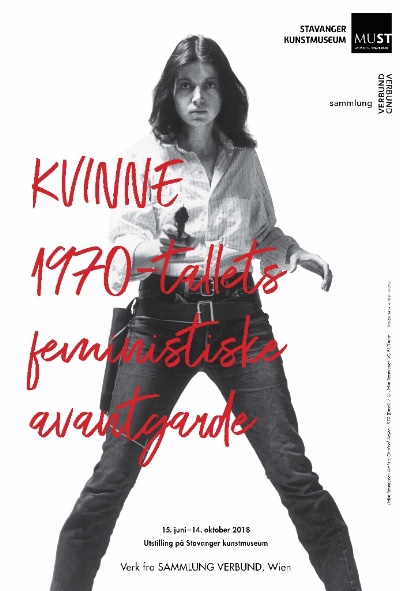 The exhibition at the Stavanger Art Museum in Norway features over 200 works of art from the SAMMLUNG VERBUND Collection, Vienna, that show how feminist artists in the 1970s began to subvert cultural constructions of women. In the process, they used their bodies as ‘projection screens’ for displaying social codes and their critique of such codes. The aim of the exhibition is to underscore the pioneering achievements of the “Feminist Avant-Garde”, a term that was coined by the collections founding director, Gabriele Schor, to rewrite the canon of art history.

Making use of relatively new art media such as photography, film, video, performance and happenings, these women artists deconstructed existing restrictive cultural and social conditioning and the mechanisms and automatisms of female oppression. For the first time in the history of art, women artists began collectively taking “representations of women” into their own hands by creating a plurality of self-determined female identities. In their works, they confronted Western society as a whole, and the art scene in particular, with radically new questions about the roles of women. The rejection of ideas conforming to traditional norms is the common link amongst the female artists of that generation. Against the backdrop of the events of 1968, the feminist movement left its mark with the rallying slogan “The personal is political”, thus challenging the one-dimensional roles assigned to women — mother, housewife, and spouse.

The exhibition is arranged in five sections: reducing women to mothers, housewives, and spouses; role-playing as masquerade and parody; the visualization of oppressive confinement and the act of breaking out;  female sexuality versus objectification and the dictates of beauty.

The FEMINIST AVANT-GARDE of the 1970s from the SAMMLUNG VERBUND Collection, Vienna brings together 57 artists from Europe and North and South America, who were born between 1935 and 1955.