If we describe Anke Röhrscheid’s work saying that this artist has perfected the technique of watercolor, we risk raising false expectations. Nothing could be further from these works than the bright, friendly and harmless world of watercolor painting. Her works combine in an unexpected and relatively singular way dense and compact surfaces with the delicate and disembodied world of the watercolor. The artist wishes to paint “in a lighter flow” than oil paints allow. Her interest in plant life, in forms that consist mostly of water, also suggests the watercolor technique. And the white of the underlying paper, which has its own quality, plays an important role too, for it is a light white that can remain where it is and doesn’t have to be additionally applied like oil paint. In numerous layers and with infinite attention, the artist molds metamorphoses and chimeras from phenomena of the living world: animals, plants and human bodies. It grows and thrives, bulges forth, expands, nature dances – it is not for no reason that dance and movement play a key role for Anke Röhrscheid, who herself used to dance ballet. “I perceive things through my body-stones, bodies, my environment,” comments the artist.

Her works have in the past been compared with Romantic art, owing to their strong feel for nature, but to my mind they seem to have more in common with the ideas of Surrealism (which is of course also rooted in Romanticism). In the world of the Surrealists too, the boundaries between humans, animals and plants have been removed, especially in the work of Max Ernst, one of Anke Röhrscheid’s favorite artists. “Art is perhaps the most visible return of the repressed consciousness,” said Sigmund Freud, whose analyses of the human psyche the Surrealists are known to have referenced. We as observers experience precisely this form of border-crossing in the things going on in these pictures, however dif cult they are to grasp – an insect on the skin, something closes up or opens, spiraling, entwined or twisted forms rise up and interlock, interwoven shapes repeatedly trigger associations in the observer. Yet fortunately everything remains suspended, undecided, undefined and only hinted at.

The observer also often associates underwater worlds with algae and deep-sea creatures. All that nature has to offer, its beauty, but also its horror and endangerment to life, can be found in Anke Röhrscheid’s works. Some works look like something you might see through a microscope; molecules or DNA chains wind across the surface, yet exactly what it is eludes us and as such is fascinatingly open.

Another important element is color: the glowing, provocative red the artist uses, the bright pink or softer rose hue, sometimes darkened into a mysterious reddish brown. Humans respond to color far more strongly than to shape. Anke Röhrscheid told me that she also admires Rembrandt a great deal, namely owing to the light on his figures. There is often very little light and the darker the picture, the more important it is what we can actually see. As under water – any diver will know the phenomenon. It is precisely Anke Röhrscheid’s darker works that emit an internal glow, a kind of milky light that makes the contours soft and uid. I truly know of no other artist today who produces such subtle effects. Despite the strong reference to nature, her work also contains a highly provocative element – it is no coincidence that the works also reference the body, skin, pink openings, which could be anything.

Röhrscheid’s works are often small, yet they are always in themselves monumental, and incredibly the smallest ones in particular. Especially in her postcard-sized watercolors the unpent area plays a particularly large role (with forms protruding into the composition from the edge) and we as observers tend to complete the missing parts in our head. By deliberately cropping a motif the artist creates tension (incidentally a tool that has been around in particular since the dawn of the Modern Age, roughly since the Expressionist era in the early 20th century). It was artists like Ernst Ludwig Kirchner or Alexej von Jawlensky who stopped positioning their portrait or still-life motifs in the center of the canvas as was expected, but at the edges and cropped their motifs to create more tension. This revolutionary method brought movement to painting; it is like a film scene, as we are more than used to today from advertising and the media.

We could entitle a very special and relatively current series by Anke Röhrscheid “Almost nothing.” It features small black works that particularly challenge us as observers. They are less eye-catching than her large, glowing red, often very allusive and erotic watercolors. Her small black works are more for aficionados; you have to get very close to them and really study them, which incidentally is a major problem today. For when viewing contemporary art, we increasingly tend to stroll past large works practically without pausing. What these works require is an exploration of sensations en miniature, for most of the artist’s watercolors are mysterious and ambiguous. We can spend a great deal of time looking into this subtle, sometimes dark world of Anke Röhrscheid, a world of hybrids and composites, as in a dream.

Presentation of the Contemporary Art Collection

The Body of Drawing #1 – The Touch of Density

The Wall and Other Stories

Vernissage on 25.04.2018, 7 – 9 pm
The opening speech will be given by Dr. Ingrid Pfeiffer, SCHIRN Kunsthalle, Frankfurt 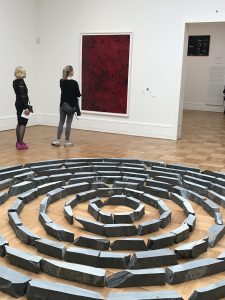 Anke Röhrscheid’s work Ohne Titel can now be seen in the permanent exhibition at the Staatsgalerie Stuttgart! 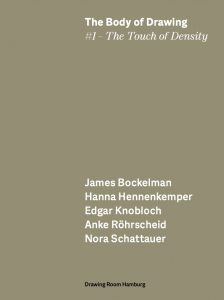 The body of drawing 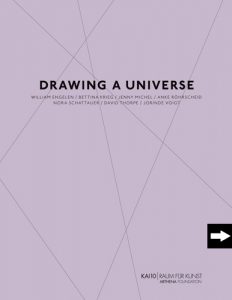 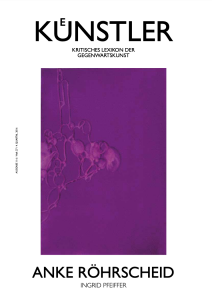 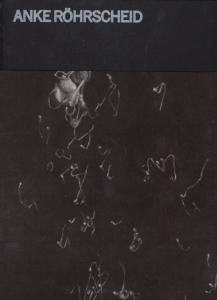