Annegret Soltau‘s work has been considered fundamental for the development of experimental and performative art of the 70s and 80s. She has often been appointed as an important reference for the feminist art of that early period. Recently, her work was included in “Wack! Art and the Feminist Revolution”, the first comprehensive, historical exhibition to examine the international foundations and legacy of feminist art, organized in 2007 by Moca in LA, and presented also at the MoMA PS1 in New York (2008) and the Vancouver Art Gallery (2009).

Annegret Soltau’s main interest is in the integration of body processes in her work, in order to connect body and spirit and treat them as equal components. Always departing from a private performance and photos of herself, the artist creates photomontages of her own body and face sewn over or collaged with black thread. „Selbst/ Self“(1975-76) started with a series of wrapping actions, in which Soltau tied both single people as well as entire groups with a strong black thread. The thread is sewn like filigree webs across her face and exerts a delicate tension; the result is very sophisticated and beautiful. Exploring issues related with female identity, these works are among the most well-known of this German artist and performer.

In Soltau’s own words “Permanente Demonstration“(19.1.1976 and 23.1.1976) is “an attempt to trigger states of consciousness through realization of an image in real life, i.e. make an image physically. The line, becomes a realized line, the person is part of the picture. Line and person are not two opposite things but a single reality”.

The work serves no useful purpose and seeks more than a purely aesthetic pleasure. The artist understands it more like a process to re-unite consciousness and unconsciousness.

Annegret Soltau aims mainly to work intuitively, and thus achieve a sort of “self-forgetting”. She is interested in immediately perceptible experiences, as she feels that as soon as we reflect and form concepts, the original is lost and so we become limited by fixed ideas and concepts.

The photo-erasures “Ich schlafend doppelt” (1977/2004) and “Ich Wartend” (1977) both deal with her two pregnancies from 1978-80, as the artist was interested in documenting the deep impact which carrying a child had on her body and life. She feared for her artistic career as she knew from other artist colleagues, that a pregnancy could jeopardize one’s artistic career. From this intense examination resulted many video works, in which Soltau reflects upon her own pregnant body. She testifies how this experience has brought her closer to her own body.

In this period Soltau developed the idea of working the photos further, she wanted to get more out of these shots, as she didn’t want to leave them as pure documenting material. In this sense, she began to work the negatives with a needle. She scratched the surface of the negatives to a point of pure blackness, complete destruction sometimes.

To the initial singular photos followed big format photo-tableaux, in which she applied the same technique. The work with the needle generates intense black areas, which can go as far as “total” erasure.

Discussion between Annegret Soltau and Ute Gahlings at the Literaturhaus Darmstadt

I THOUGHT I WAS AN ALIEN

AN ALTERNATIVE HISTORY OF PHOTOGRAPHY

A Feminist Avant-Garde
Photographs And Persormances Of The 1970s
From The Verbund Collection, Vienna

YOUR MIRROR – Portraits from the ICP Collection

Feminist Avant-Garde of the 1970s
Works from the SAMMLUNG VERBUND Collection, Vienna at Stavanger Art Museum

Works by Christiane Feser, Igor Simic and Annegret Soltau will be presented in the exhibition Un-Mensch-Antastbar, curated by Ulrike Lehmann.

INSIDE OUT – Fotografie und Psychologie 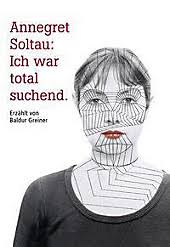