Born in Madrid (1964) to a Spanish father and an American mother, Daniel Canogar´s life and career have bridged between Spain and the U.S. Photography was his earliest medium of choice, receiving an M.A. from NYU at the International Center for photography in 1990, but he soon became interested in the possibilities of the projected
image and installation art.

He has created permanent public art installations with flexible and rigid LED screens including Aqueous at The Sobrato Organization (Mountain View, 2019); Pulse, at Zachry Engineering Education Complex in Texas A&M University (College Station, 2018), Tendril for Tampa International Airport (Tampa, 2017); Cannula, Xylem and Gust II at BBVA Bank headquarters (Madrid, 2018);Waves, for the JP Morgan atrium of 2 Houston Center, (Houston, 2012) and Travesias for the atrium of the European Union Council during the Spanish Presidency of the European Union (Brussels, 2010). He has also created public monumental artworks in different mediums such as Constellations, the largest photo-mosaic in Europe created for two pedestrian bridges over the Manzanares River, in MRío Park (Madrid, 2010) in collaboration with Burgos & Garrido architectural studio and Asalto, a series of video-projections presented on various emblematic monuments including the Arcos de Lapa (Rio de Janeiro, 2009), the Puerta de Alcalá (Madrid, 2009) and the church of San Pietro in Montorio (Rome, 2009). Also part of the serie is Storming Times Square, screened on 47 of the LED billboards in Times Square (New York, 2014).

The sculptural artwork is composed of four metal ribbons lined with LED screens that cascade down the wall. The sinuous shape of Waterfall is reinforced by the constant flow of abstract images that slide down the screen surface. The video is generated in real-time by global trading data. Waterfall attempts to capture the ceaseless ebb and flow of financial data that touches us in more ways that we can imagine.

ALL ART IS VIRTUAL

All Art is Virtual

Biomedia: The Age of Media with Life-like Behaviour

Echoes: A World between the Analogue and the Virtual

Game Over
Homo Ludens. Videogames to understand our present. 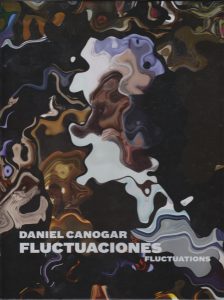 Published in english and spanish 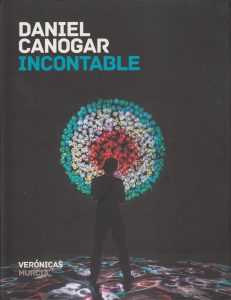 Published in English and Spanish

Daniel Canogar – Bringing down the House