Johan Grimonprez’s critically acclaimed work dances on the borders of practice and theory, art and cinema, documentary and fiction, demanding a double take on the part of the viewer. Informed by an archeology of present-day media, his work seeks out the tension between the intimate and the bigger picture of globalization. It questions our contemporary sublime, one framed by a fear industry that has infected political and social dialogue. By suggesting new narratives through which to tell a story, his work emphasizes a multiplicity of realities.

Grimonprez’s curatorial projects have been exhibited at museums worldwide, including the Hammer Museum, Los Angeles; the Pinakothek der Moderne, Munich; and MoMA. His works are in the collections of Centre Georges Pompidou, Paris; the 21st Century Museum of Contemporary Art, Kanazawa; and Tate Modern, London. His feature films include dial H-I-S-T-O-R-Y (1997, in collaboration with novelist Don DeLillo) and Double Take (2009, in collaboration with writer Tom McCarthy) and Shadow World (2016, in combination with journalist Andrew Feinstein). Traveling the main festival circuit from the Berlinale, Tribeca to Sundance, they garnered several Best Director awards, the 2005 ZKM International Media Award, a Spirit Award and the 2009 Black Pearl Award at the Abu Dhabi Film Festival, and were also acquired by NBC Universal, ARTE, and BBC/FILM 4.

He published several books, including Inflight (2000), Looking for Alfred (2007) and a reader titled It’s a Poor Sort of Memory that Only Works Backwards (2011) with contributions by Jodi Dean, Thomas Elsaesser, Tom McCarthy, Hans Ulrich Obrist, and Slavoj Žižek.

He lectured widely, among others at the University de Saint-Denis (Paris 8), Kennedy School of Government at Harvard University’s Institute of Politics; Tate Modern; MoMA (New York); Columbia University; Massachusetts Institute of Technology (MIT); the Parliament of Bodies of Documenta 14, and he participated in the Whitney Museum Independent Study Program, and is now on a research grant at HOGENT/KASK , Ghent.

His recent film project (with investigative journalist Andrew Feinstein), Shadow World: Inside the Global Arms Trade, was awarded a production grant from the Sundance Institute, premiered at the 2016 Tribeca IFF (New York). It went on to win the Best Documentary Feature Award at the 2016 Edinburgh International Film Festival, and premiered its US broadcast on Independent Lens on PBS in 2017. 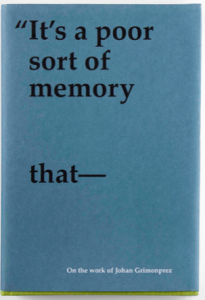 it’s a poor sort of memory that only works backwards 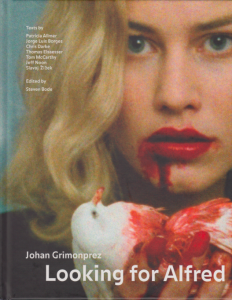