Lena Ditlmann has lived and worked in Frankfurt am Main for twelve years. She is a graduate of the University of Art and Design, Offenbach. In addition, she studied for two years at the Frankfurt Städel School with Professor Judith Hopf. Her works are predominantly created by using analog means and show abstract constructions based upon mathematical structures from the visible world. Since 2016, Lena Ditlmann works with the Frankfurt gallery owner Anita Beckers.

The abstract motifs of Lena Ditlmann’s drawings are made up of fine lines that she weaves into one another and whose composition stems from the structures of natural forms. To do this, she studies exhibits at corresponding museums and completes sketches and photographs of the nature.

In her studio, these records are analyzed and further developed. Lena Ditlmann’s focus lies not in the visual imitation of organic structures and forms, but rather she is interested in the systematic makeup of the natural elements. This alludes to mathematic properties that have fascinated mankind since ancient Greece and can be understood as the original structures of the world. By using these properties as her design medium, Lena Ditlmann constructs shapes that oscillate on the verge of the visual/objective and invisible/subjective world.

Lena Ditlmann was chosen as part of the AIR-Frankfurt Scholarship program and completed a three-month residency in Strasbourg, France. At the end of her residency, she exhibited her work at the CEAAC (Centre Européen d’Actions Artistiques Contemporaines) 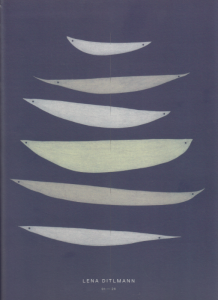 published in English and German