Federico Solmi’s exhibitions, which often combine articulate installations composed of different media such as video, drawings, mechanical sculptures and paintings, use bright colours and a satirical aesthetic to portray a dystopian vision of our present day society. Irreverent, surrealistic, the videos and the works by Solmi are as he is: extravagant, rowdy and ironic. They are satires about the evilness and the vices that affect contemporary society and mankind. The artist uses images culled from the video game industry, pop culture, and the Internet and collages them with a historical influence to produce original artworks about the seemingly disparate subject at hand. The universe that Solmi likes to represent is the exaltation of a present that is crumbling apart. His work is a criticism of a system that approves and trusts without questioning the fragile foundation on which our culture and post-modernist society is based.

Federico Solmi’s The Great Farce acquired by the Phillips Collection

Check it out at: www.federicosolmi.com 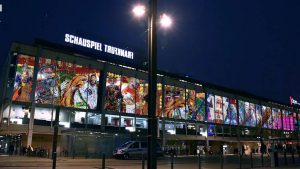 B3 Biennial of the Moving Image

For the biennial, Solmi created an over 100 meter long and 6 meter high installation The Great Farce that was shown for the duration of the festival on the Schauspielhaus on Willy-Brandt-Platz. 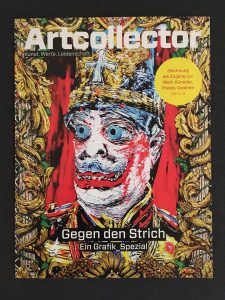